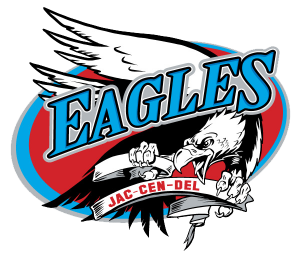 What is a Jac-Cen-Del Athlete?

The Jac-Cen-Del athlete is a person who has responsibility to parents, team, school, and community. This responsibility extends to conduct and appearance on and off the playing field throughout the calendar year. The athlete is an active participant in at least one interscholastic sport throughout the school year and continues at all times thereafter to follow the athletic code.

All athletes must be in attendance at school, for a full school day (arrive by 8:30am), to be eligible to practice or play in an athletic event for that day. The only exceptions to the above rule is a doctor’s excuse, dentist’s excuse, funeral, religious obligation, court appearance, driving exam or special permission in advance from the principal or athletic director. The principal and/or athletic director can rule in extenuating circumstances. A violation of this rule could result in a minor offense and will be dealt with accordingly.

A student athlete of Jac-Cen-Del is a representative of the school. How the student athlete conducts him or herself in school and in his or her personal life reflects upon the image of the school. Fellow students, especially younger students, look up to students athletes as role models. The school recognizes and assumes an obligation to the Jac-Cen-Del community which supports the athletic programs to maintain high standards of sportsmanship and conduct.

To protect these interests, we adopt the following standards by which the conduct of student athletes will be measured: